Last weekend, I was ordained a Zen priest.

How did this transpire ?

After practicing assiduously in various traditions for several years, the last ones being Zen/Dzogchen/inquiry,  awakening happened.

A couple months ago, we had my Zen teacher and his wife over for dinner.
He asked me ” Why don’t you ordain? Then you can teach. ”
At that moment,  there was one only one answer which flowed.

Am not the first practitioner to ordain after waking up.

The famous ( in the Zen world) 6th Zen patriarch, Hui Neng, for instance, woke up well before his awakening was “recognized” formally. (He got someone to write an awakening poem of his on a wall where the Abbot would hear about it. The Abbot recognized his awakening at once, made him his successor and then told him to flee the monastery for his life !) 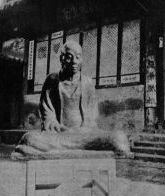 The vastness encompasses everything, does not fit into anything.

It is already perfectly everywhere.

Why go back into a tradition as no-one?

Part of the answer is in the recent post ” Samu in the Snow “.

The Absolute does not invalidate the Relative.

A valid question, regardless.

Zen is about transmission outside the written word.

Awake Zen teachers exist. Now there is one more. Awake teachers  recognize their students’ awakening. Arvis Justy and Steven Gray (Adyashanti) come to mind as contemporary awake examples from a tradition that still carries a simple message of liberation, a simple prescription of practice and a tangible result.

That’s what I love about Zen!

One of the elements of a post-awakening life is some kind of selfless service.

The service can take innumerable forms.

Transmission outside the scriptures addresses many needs at once.

Any role in conveying transmission potentially helps many people.

Step outside the written word .

Look with fierce intensity until finally seeing the truth.

For the pic of Hui Neng: http://www.selfdiscoveryportal.com/cmHuiNeng.htm