[ Guest post from Andre Doshim Halaw of the blog ZEN AND BACK AGAIN . Enjoy !] 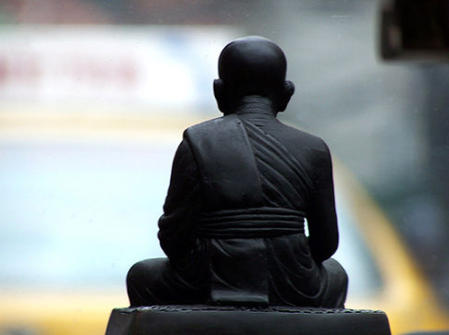 The more I study Buddhism the more confused I become. Not because I don’t understand the teachings, but because the deeper I dig, the less consensus I find. Take anatman, for instance.

There are at least four different interpretations–that I can think of–of the Buddha’s most radical teaching:

1.) There is no self. What we normally conceive of as a self or “I” is really a matrix of converging sense perceptions, volitional patterns, feelings, and habitual, pre-conscious responses to stimuli. It’s like seeing a constellation in the sky. Sure there are stars, but the constellation itself is a mental creation as your mind plays connect the dots.

2.) There is no permanent self. The entire world is in flux, and if we study our mind states, body, feelings, etc., we find that they too are constantly changing.

3.) There is no separate, independent self. All phenomena are conditioned, which means they cannot exist on their own, or “from their own side.” In other words, they lack a central essence or self. So everything in the universe is connected because they are all empty. I borrowed this almost word for word from Thich Nhat Hanh, except he would use words like “interbeing” rather than emptiness.

4.) The self is conventional but lacks inherent existence on an ultimate level. This means that on an empirical, day-to-day level, the self serves a utilitarian function–it allows us to negotiate our way through the world. Try telling your landlord that you shouldn’t have to pay your rent because you aren’t the same person who signed the lease! On an ultimate level though, the self is empty of inherent existence.

Obviously some of these overlap and are not mutually exclusive. Each, I think, reflects a different Buddhist perspective. For instance, #s 1 and 2 are more Theravadin and originate primarily from the Pali Canon; #3 is Zen or Mahayana, influenced by the Prajnaparamita and Tathagatagarba sutras; and #4 Madhyamika or Tibetan, influenced by thinkers like Nagarjuna and Tsong Khapa.

Contrary to what some may say, I don’t think that these are all expressions of the same principle. Each emphasizes the teaching differently, resulting in unique practices, teachings, and cultural expressions. Nor do I think this is a subject that we can just write off as mere metaphysics, as the body of the Buddha’s teachings rests on the principle of anatta. Sure, no-self can itself become an object of clinging for some people, but the Buddha did teach it for a reason–to relieve the root of all suffering, self-grasping.

I’m currently reading Selfless Persons by Steven Collins. The book is about the teaching of anatta in the Pali Canon, the primary literature of the Theravadin school. Collins constructs a pretty convincing argument that the historical Buddha taught that there is no self; that belief in a self is the source of grasping, and thus all suffering. I find that Western Buddhists, and Americans in particular, are extremely apologetic about no self. They tend to dismiss this teaching, not only because it doesn’t sit well with our psychologically oriented culture, but because they don’t think the Buddha would have taught that there is no self. The argument commonly levelled at this reading of anatta is that it is nihilistic.

But is it fair to call the teaching nihilistic if the self doesn’t truly exist, like horns on a rabbit or the value we place on money?

As a Zen Buddhist, this confuses the hell out of me. Because modern scholarship has pretty much proven that the Buddha did not recite the Prajnaparamita and Tathagatagarba sutras, contrary to what the Mahayana and Vajrayana traditions claim (which in no way invalidates them as legitimate expressions of the Buddhadharma). So, if Mahayana sutras are the ones stressing the interconnected aspect of annatta while the Buddha’s own words from the Pali Canon don’t, where does that leave me, a student trying to understand anatta?

In other words, what did the the Buddha–not later Buddhists–the Buddha himself, teach about the self? That’s what I’m interested in.

Please share your thoughts, any titles you recommend, especially ones that deal with inter-Buddhist dialogues about the self.
Photo borrowed from Creative Commons Flickr user: vice1.

For more on this topic:

A former seeker starts blogging.
View all posts by dominic724 →
This entry was posted in No self and tagged Buddha, Buddhism, Buddhist, emptiness, liberation, no-self, not self, prajna, Zen. Bookmark the permalink.